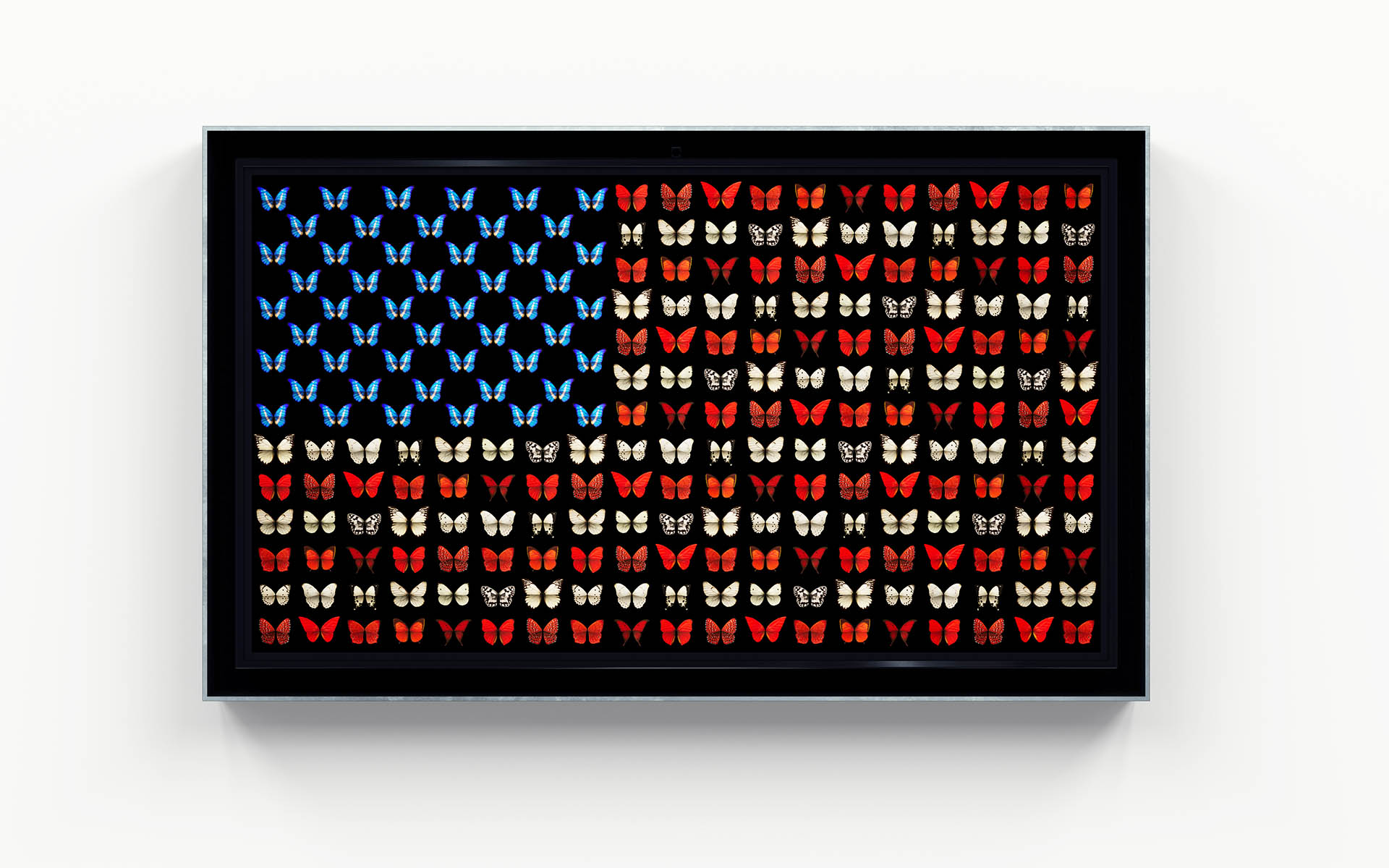 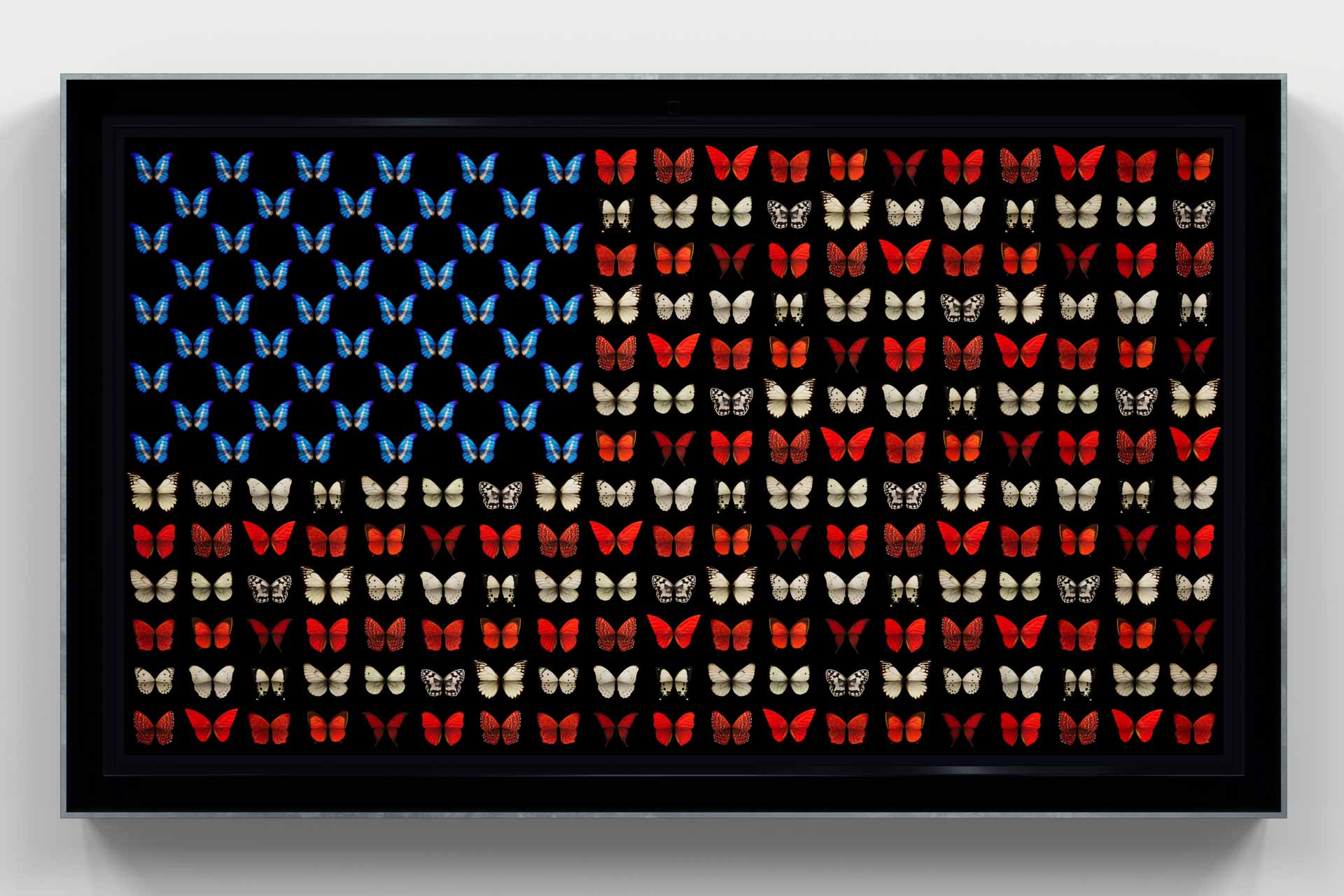 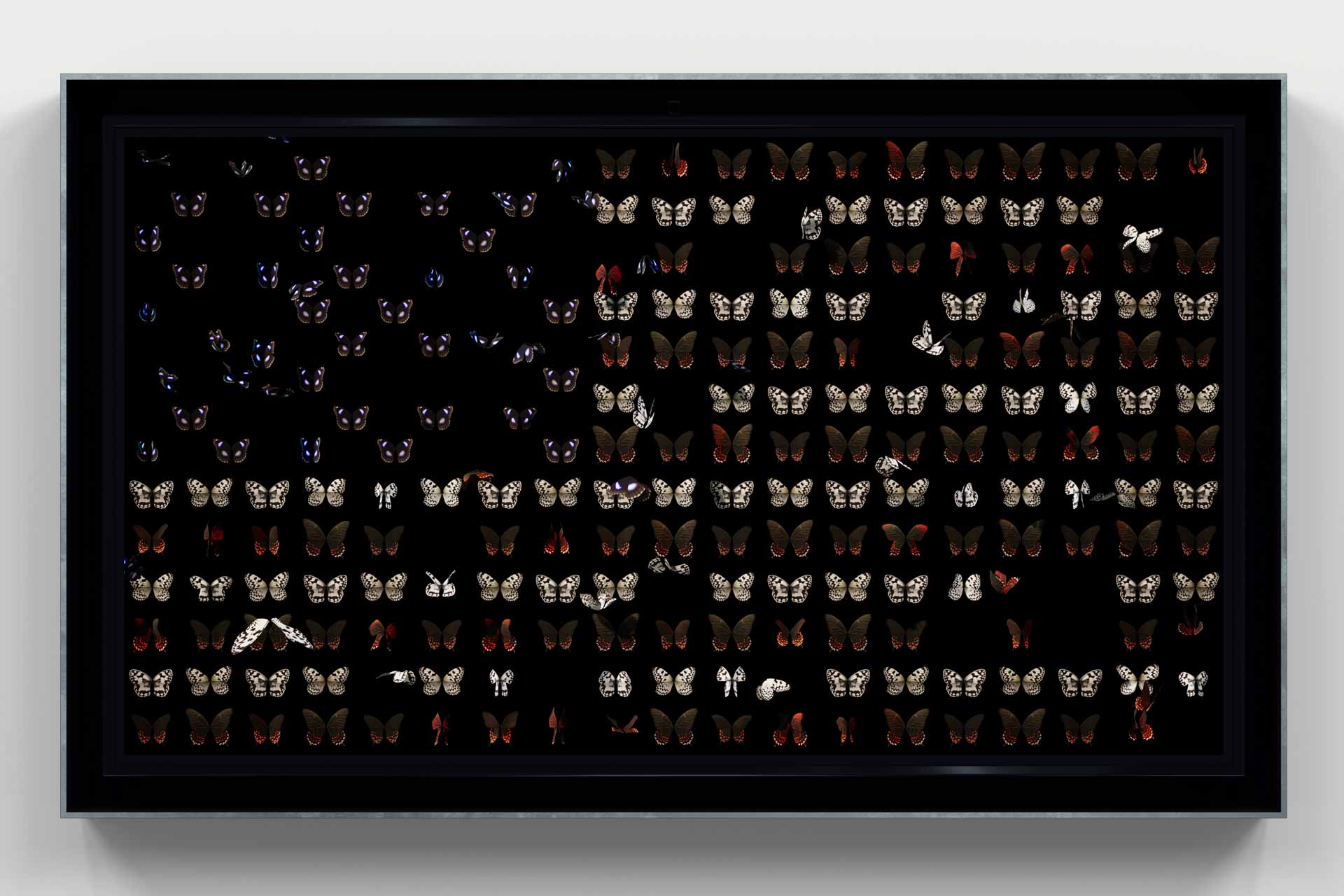 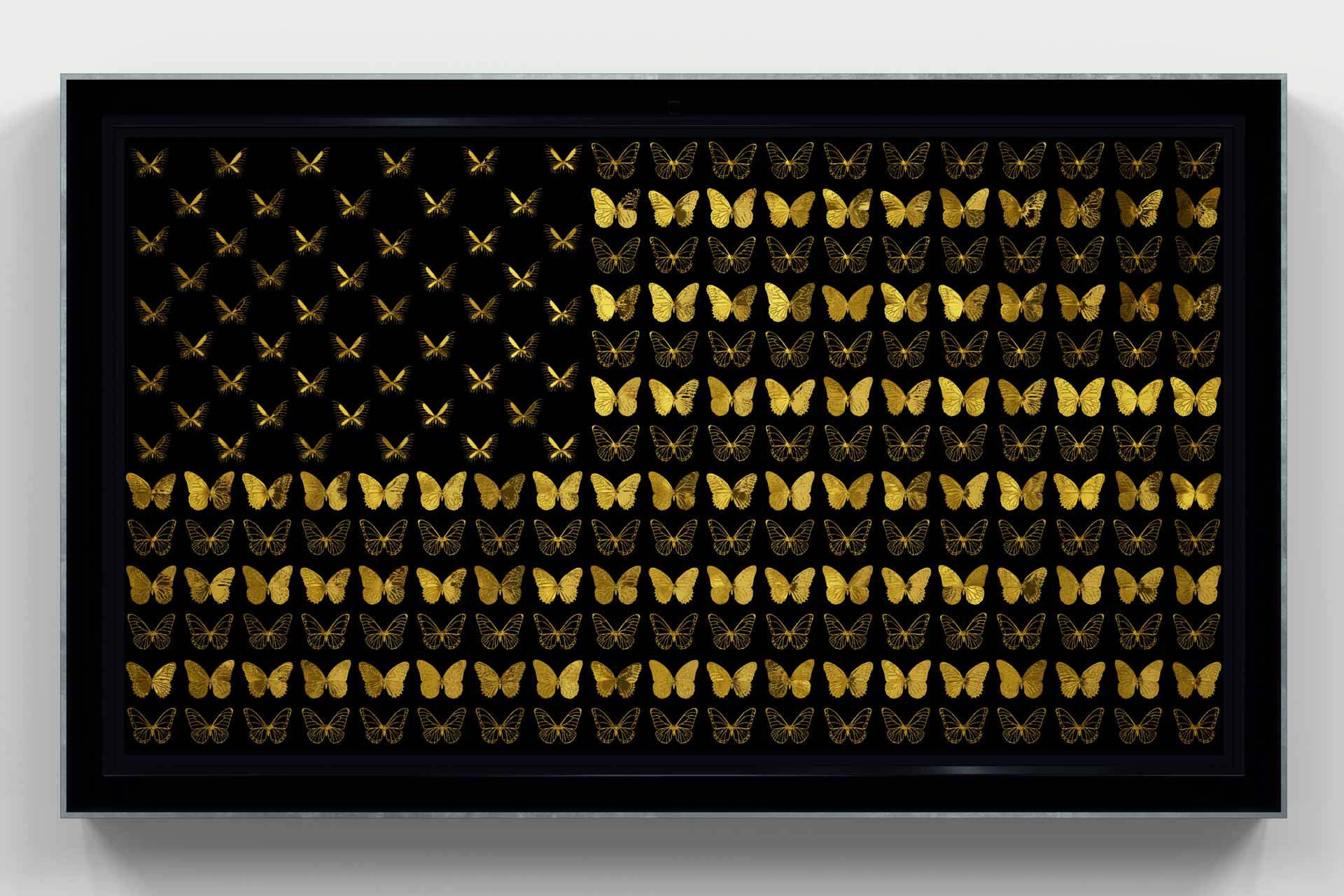 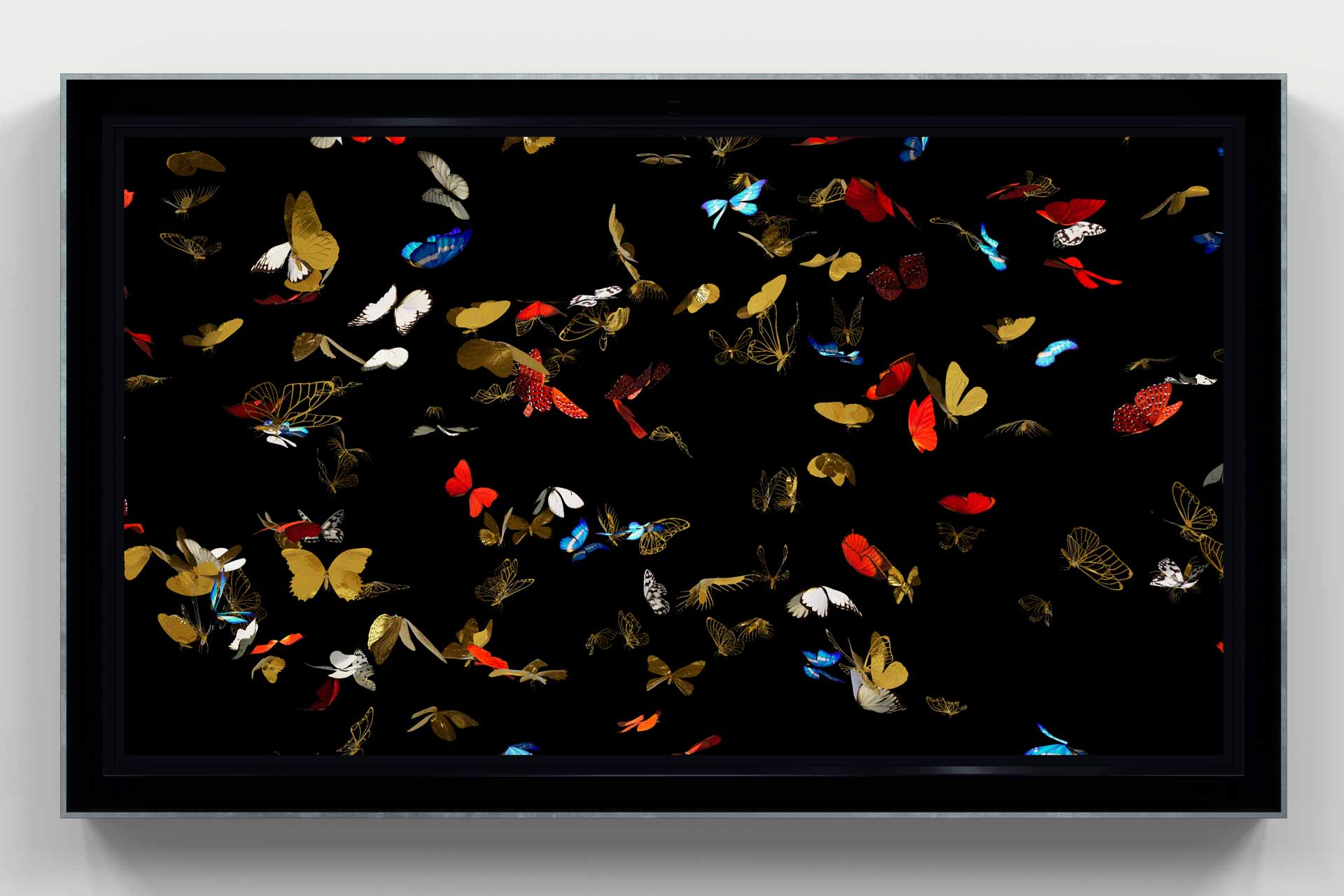 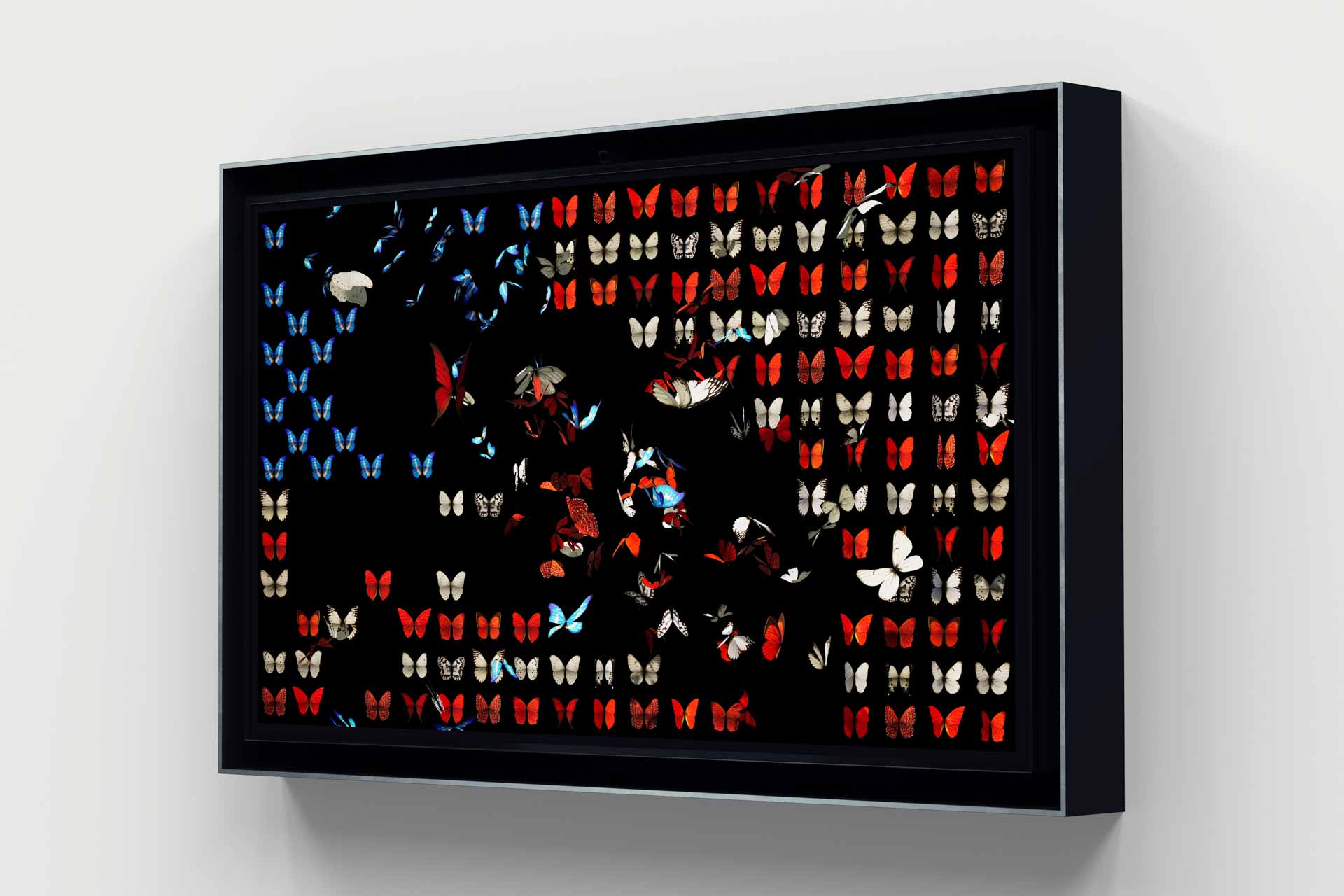 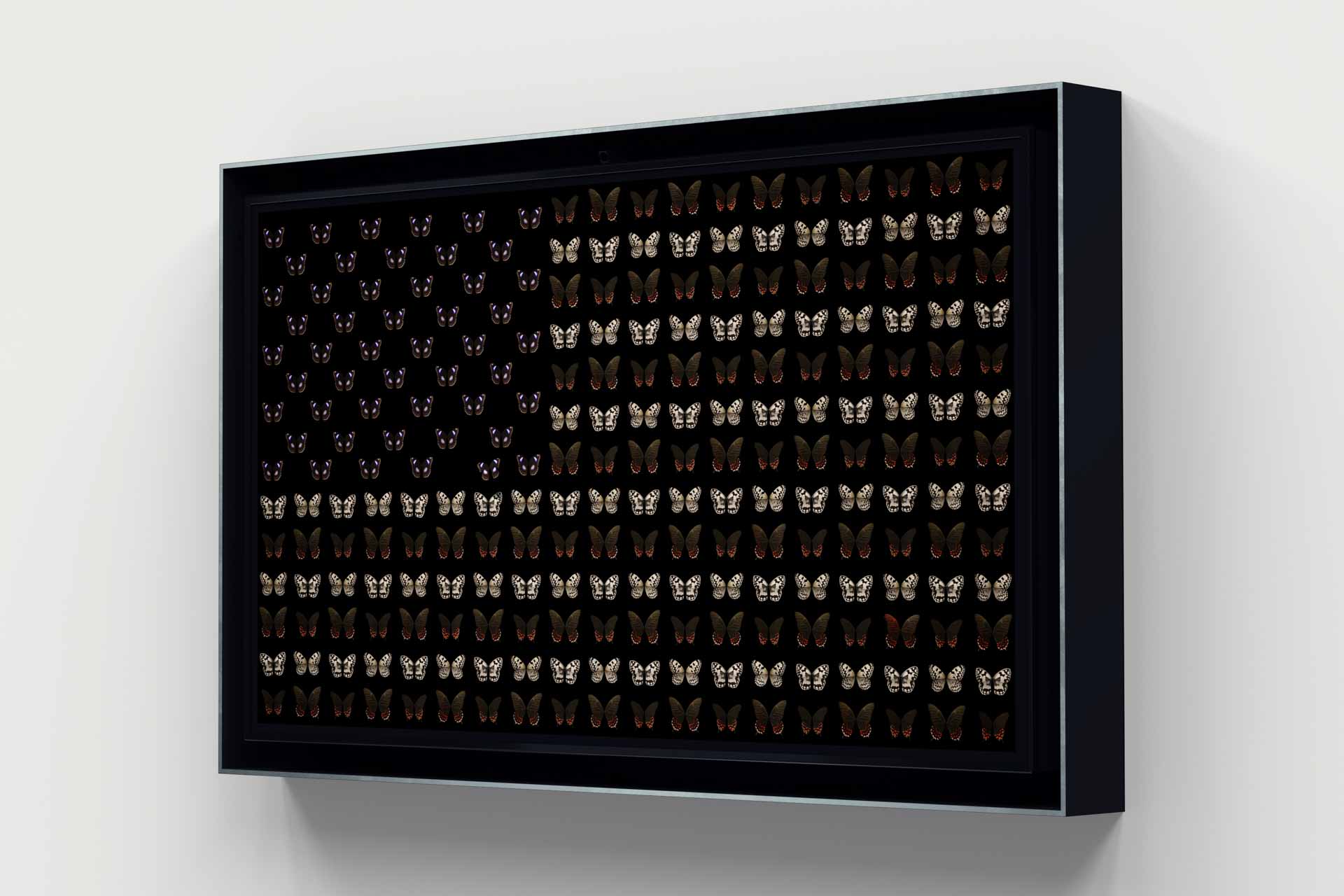 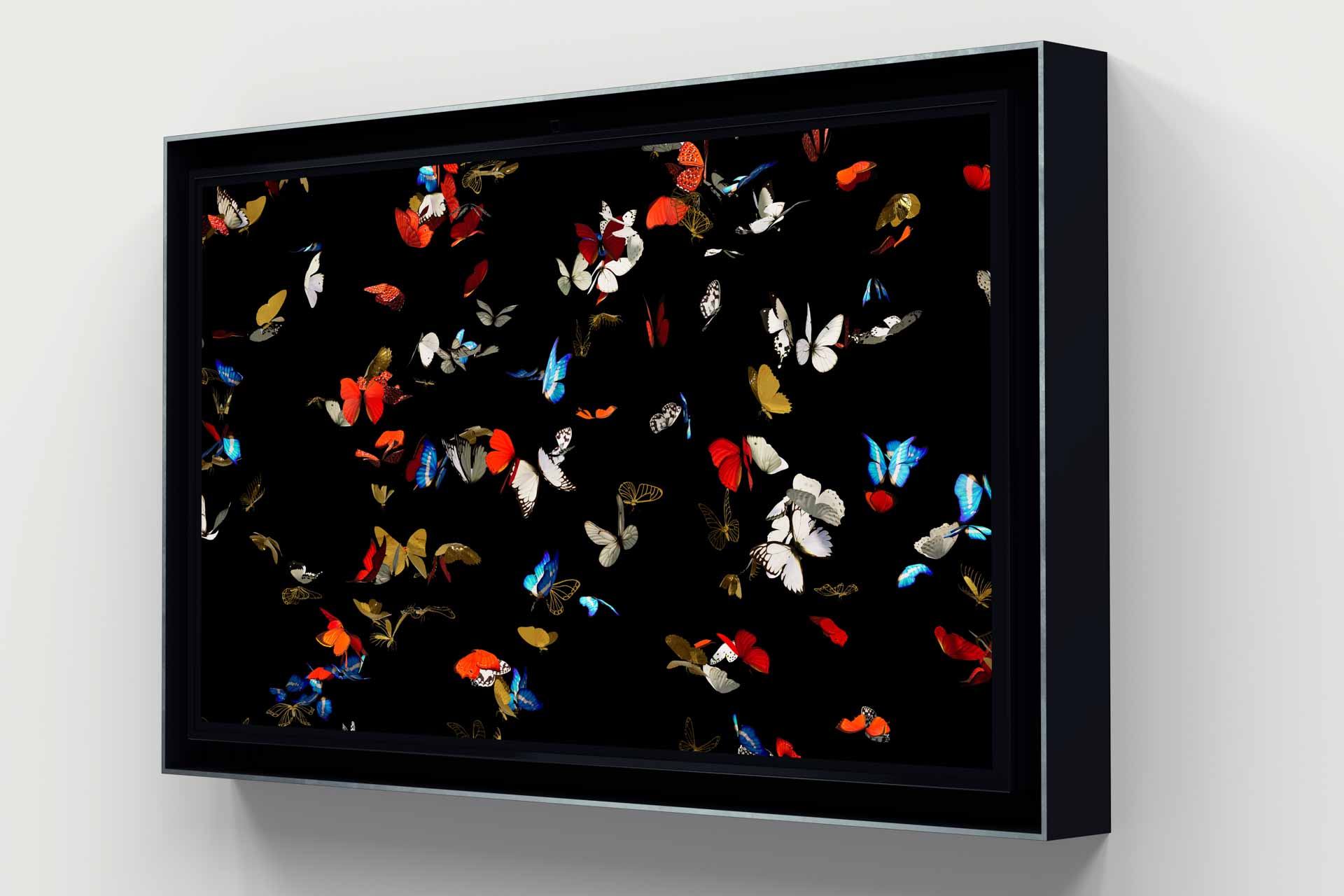 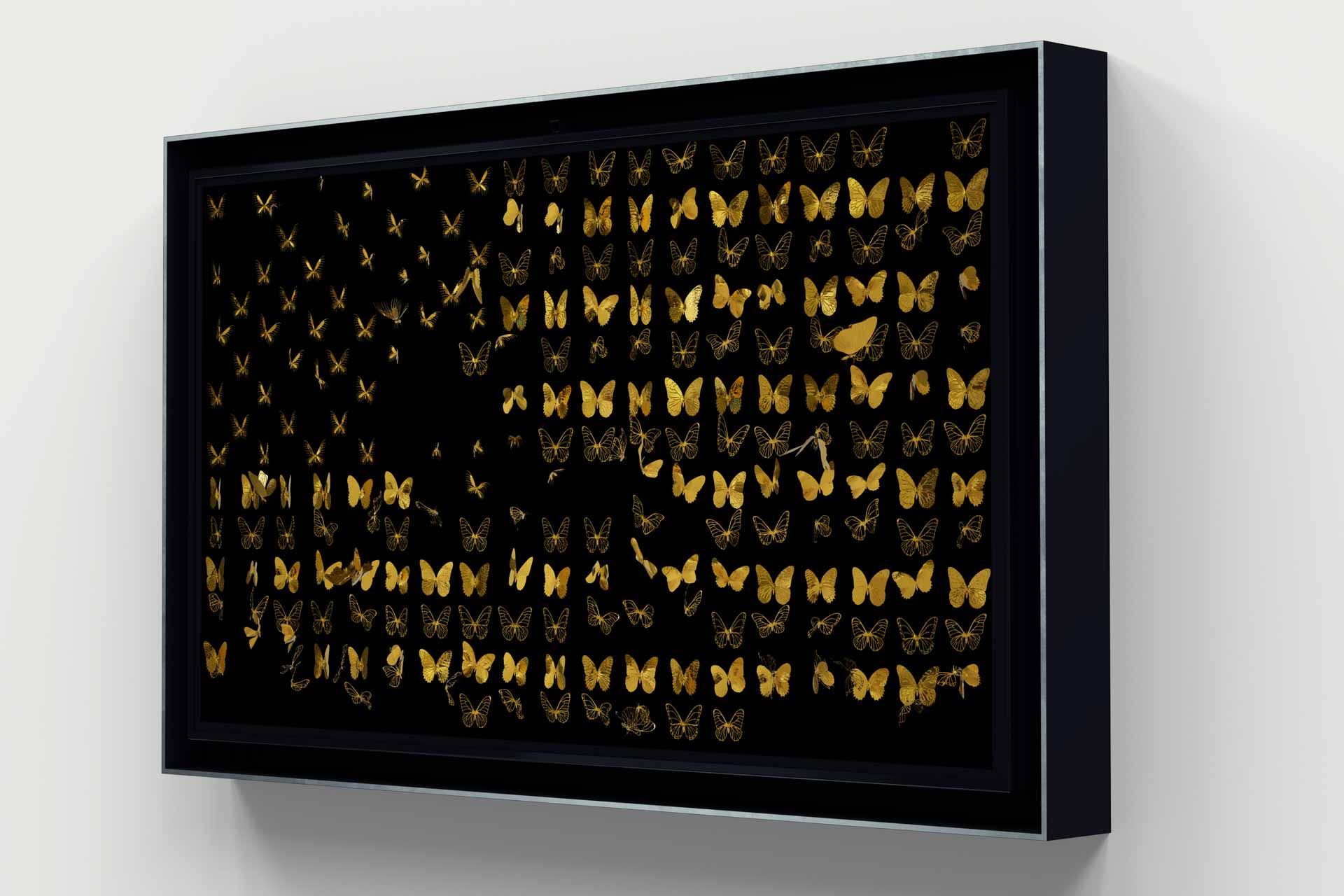 World Stage uses digital representations of global species of butterflies to animate the powerful iconography of worldwide flags. In a time when national, political and social identity has been brought to the forefront of our minds, we are ever more aware of the rich symbolism of the flag – what it means to display it and what it means to disrupt it.

The iconography of each flag alludes to a specific geographic area or population identity, whilst the large digital piece has the ability to erupt in a swarm of colour and movement evoking freedom of thought and expression. Ultimately, the butterflies return to their intended, iconic design, representing the unity and collectivity that Harris also represents here.

The transition to metallic butterflies unifies the national flags in a poignant way. Taking this material transformation to another level, the presence of the viewer’s own reflection across the surface of the metallic butterflies signifies our individual responses to the flag’s iconography.

"In World Stage, Harris has waged his butterflies to construct flags: British, Chinese, and American (World Stage: United States). For the latter version, a flag is shaped from red, white, and blue butterflies. The creatures are in continuous motion, fluttering ever so softly, even while in flag formation.
The motif is deeply significant, immediately positioning Harris in the company of historical and contemporary artists who have turned to flags in their art, among them Jasper Johns, Jean-Michel Basquiat, Ed Ruscha, Barbara Kruger, and David Hammons. Johns, for example, created over forty works featuring the American flag across a range of mediums, from wax encaustic paint on newspaper collage and oil on canvas to pencil and lithography, including bronze. In Johns’ words, “One night I dreamed that I painted a large American flag, and the next morning I got up and went out and bought the materials to begin it. And I did."3 Johns transmuted the flag from the apex of public symbols to a new context, the realm of art. The act was certainly controversial for its time, and even more in the decades following John’s first flag (now in the collection of The Museum of Modern Art, New York) in the then polarized context of McCarthyism and the controversial US military involvement in Vietnam.
Today, flags continue to carry countless, though different, interpretations and implications. Harris’s World Stage reckons with the flag’s symbolic power by pulling apart the symbol into pieces and putting it back together. Each of these “pieces” is a butterfly: the flag is composed of butterflies, both fragile and ever resilient. This dynamic also conjures up a sense of our culpability, and even fear, in front of this cycle of creation and destruction, all the more so, as we, viewers, are the ones who come to disrupt the flag from its pristine perfection. Indeed, as the butterflies that compose the flag, lyrically respond to our presence, by flying off, the flag’s composition begins to disintegrate.
Harris’s underlying message is one of overwhelming awareness of our bodies and identities in the spaces we inhabit, and how they affect the very things we perceive. No work of art could communicate better this inherent, live link, between us, living ‘under’ a flag, and living within a flag: we are the flag that we are seeing. Our actions, ever so slight, count, have an impact."
Extract from "Dominic Harris – Portals of Life" by Joachim Pissarro

Other artworks and collections related to '
World Stage: United States
' include: 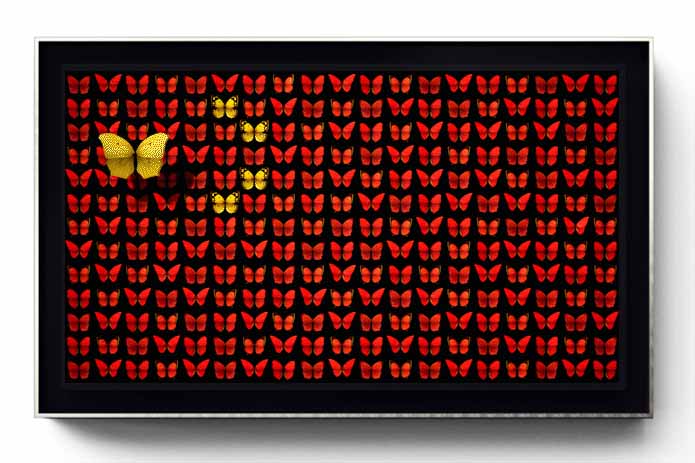 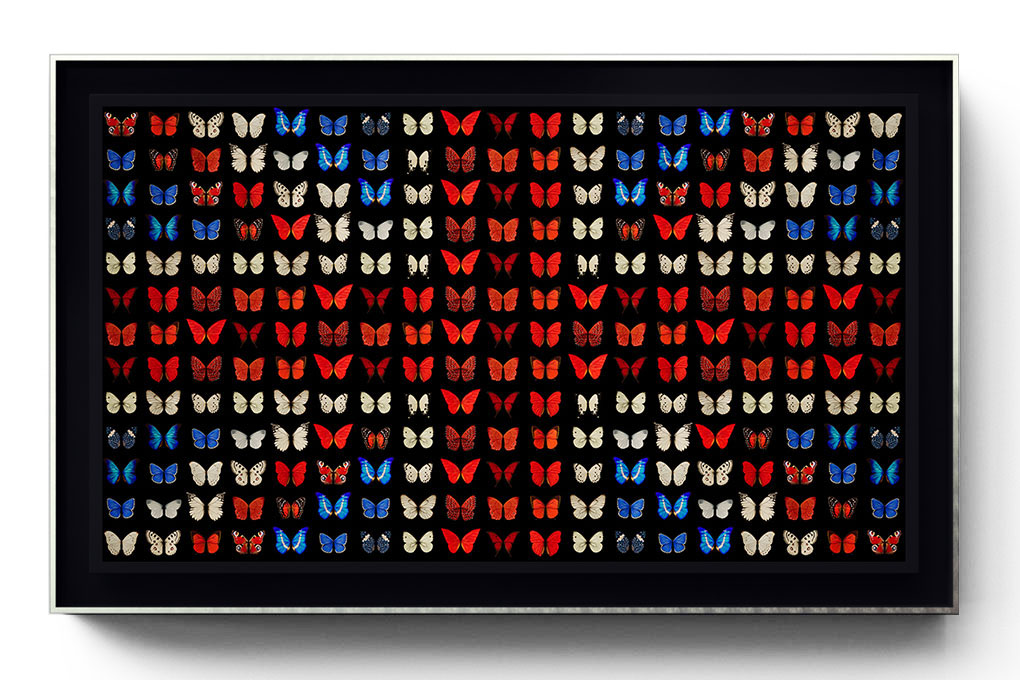 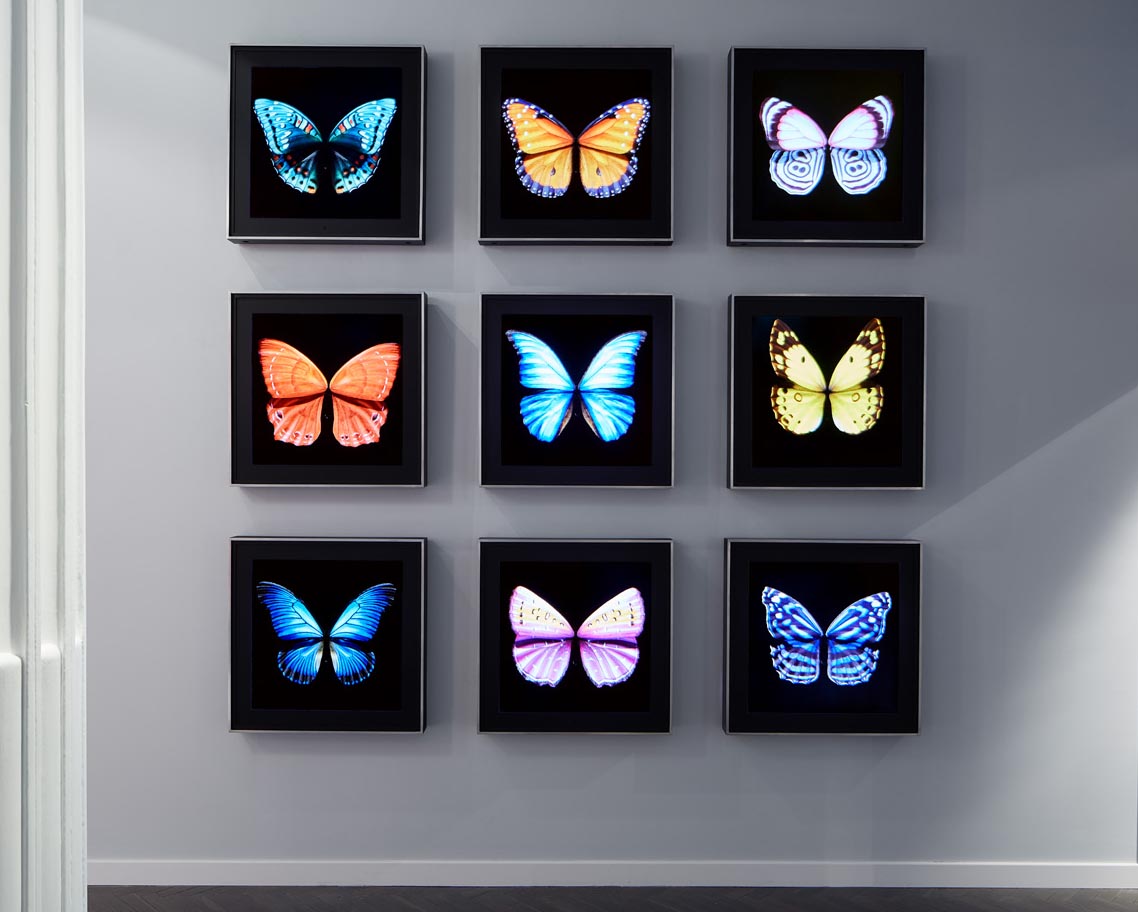 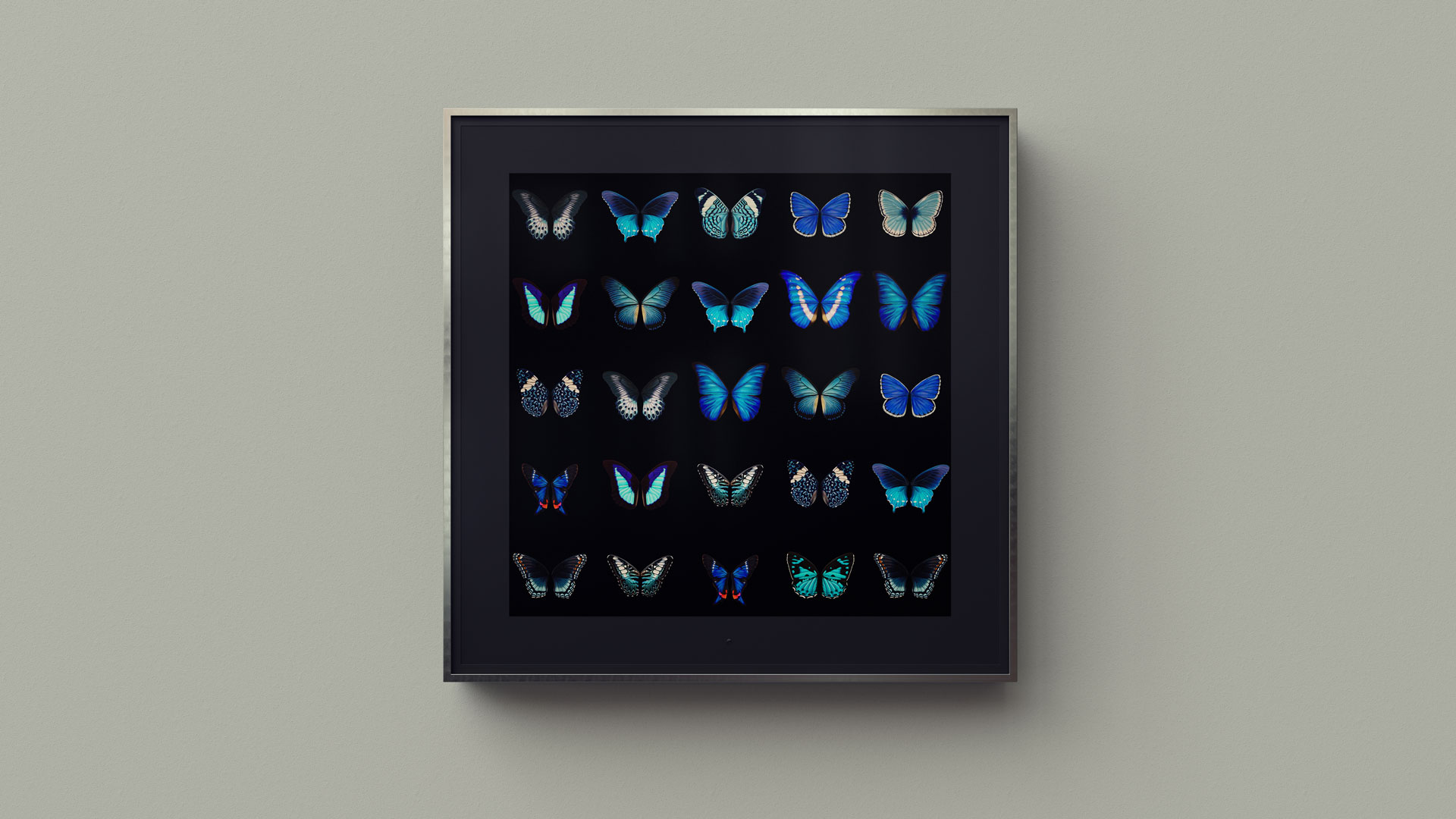