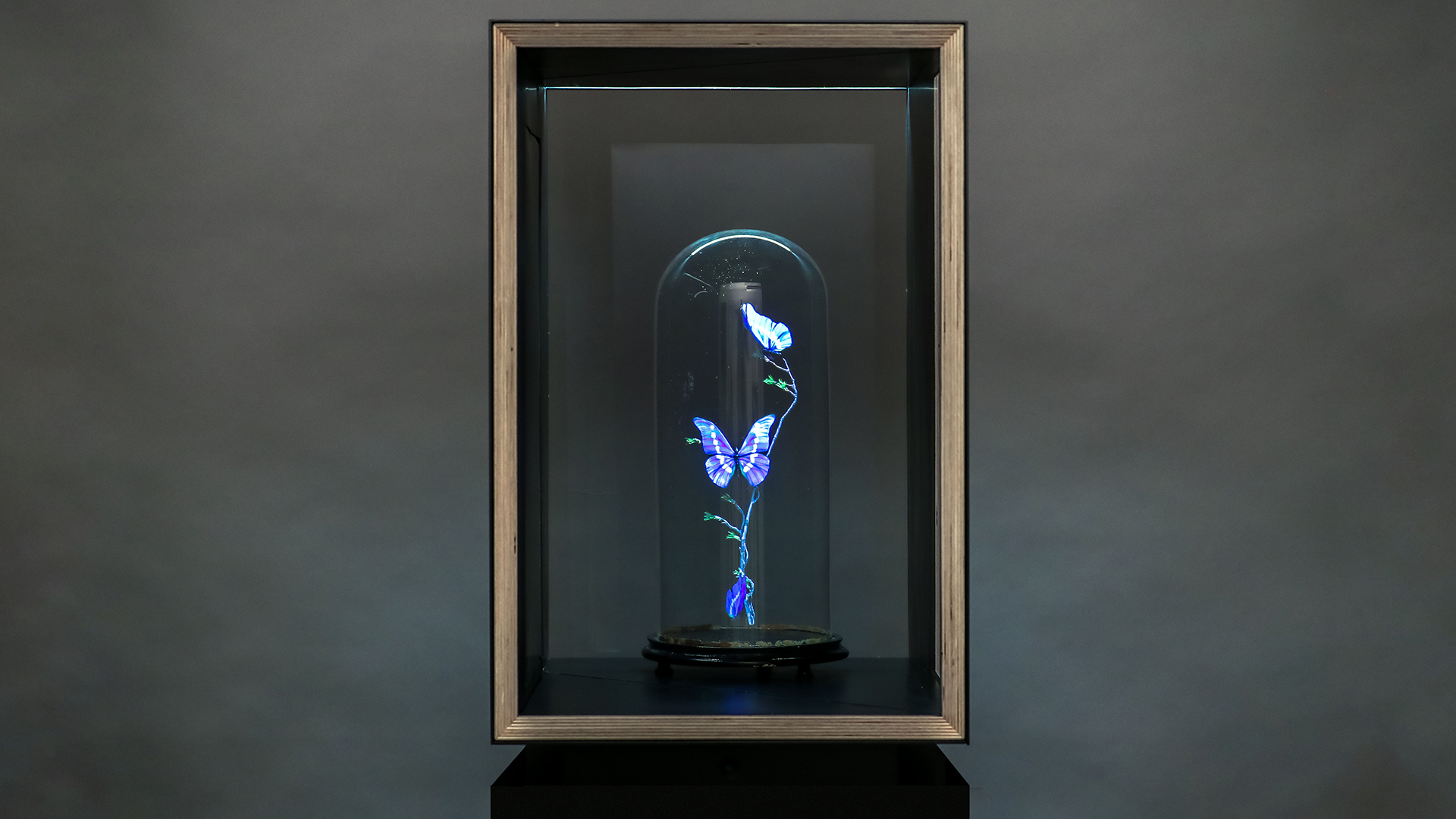 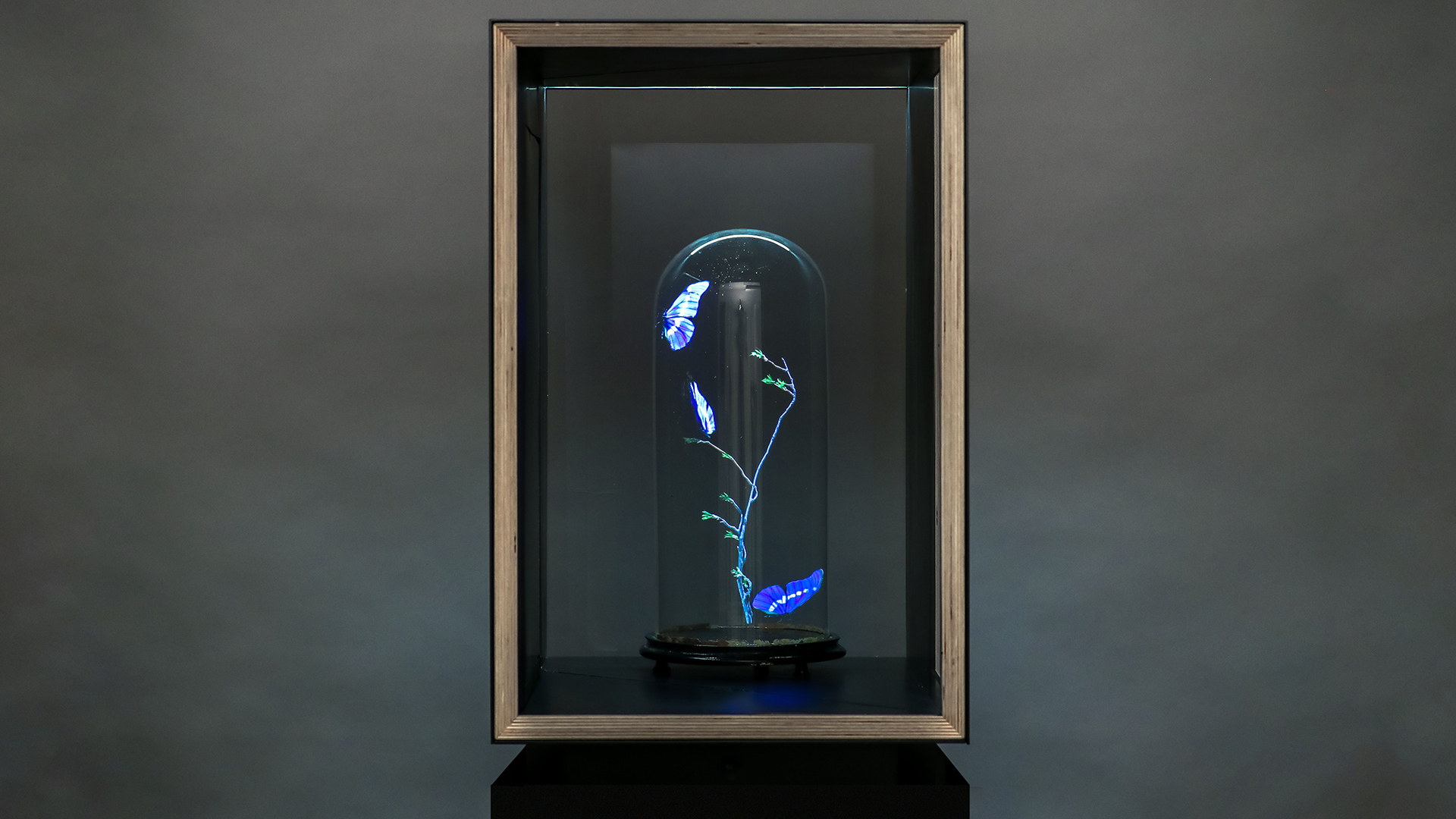 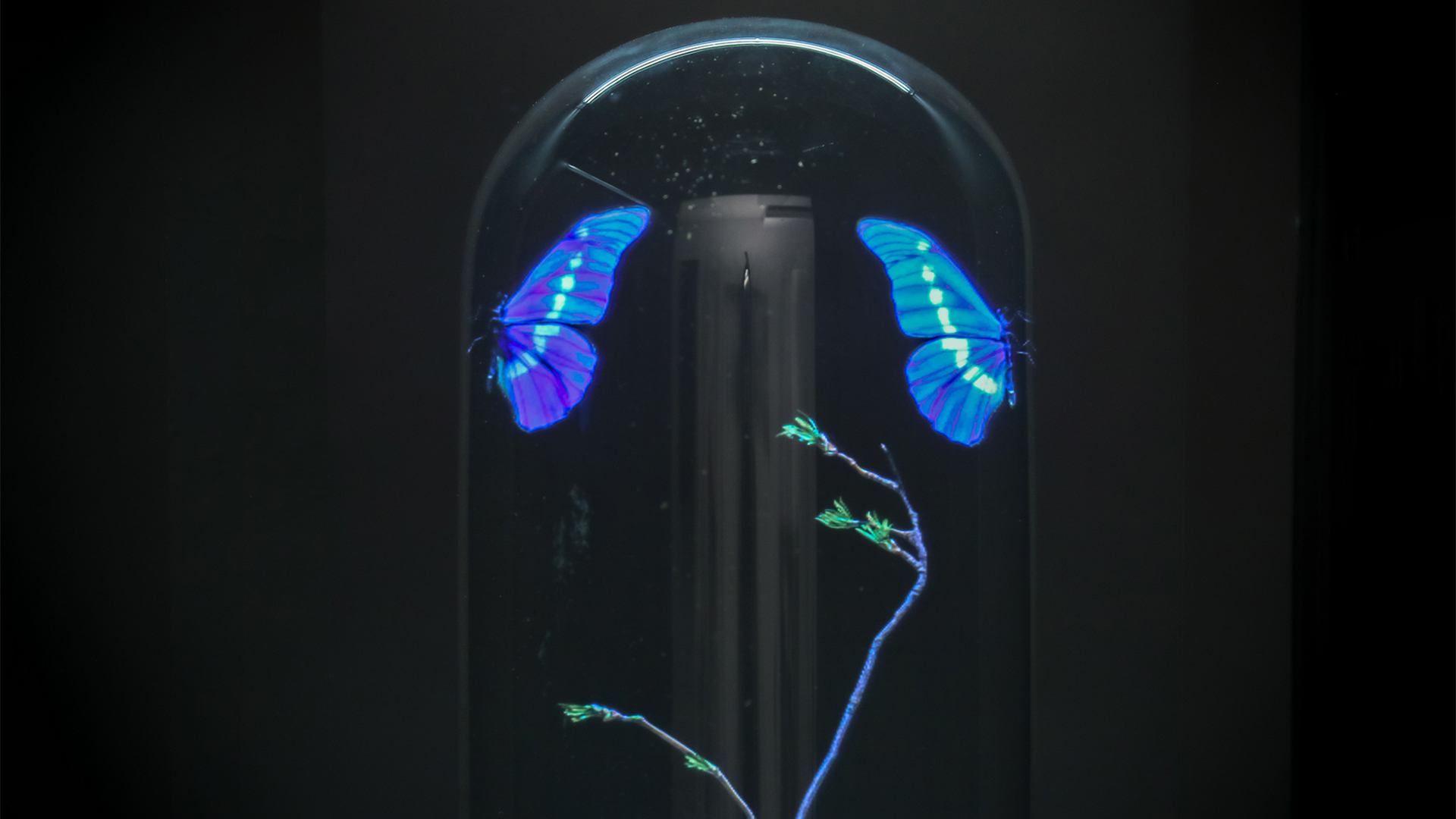 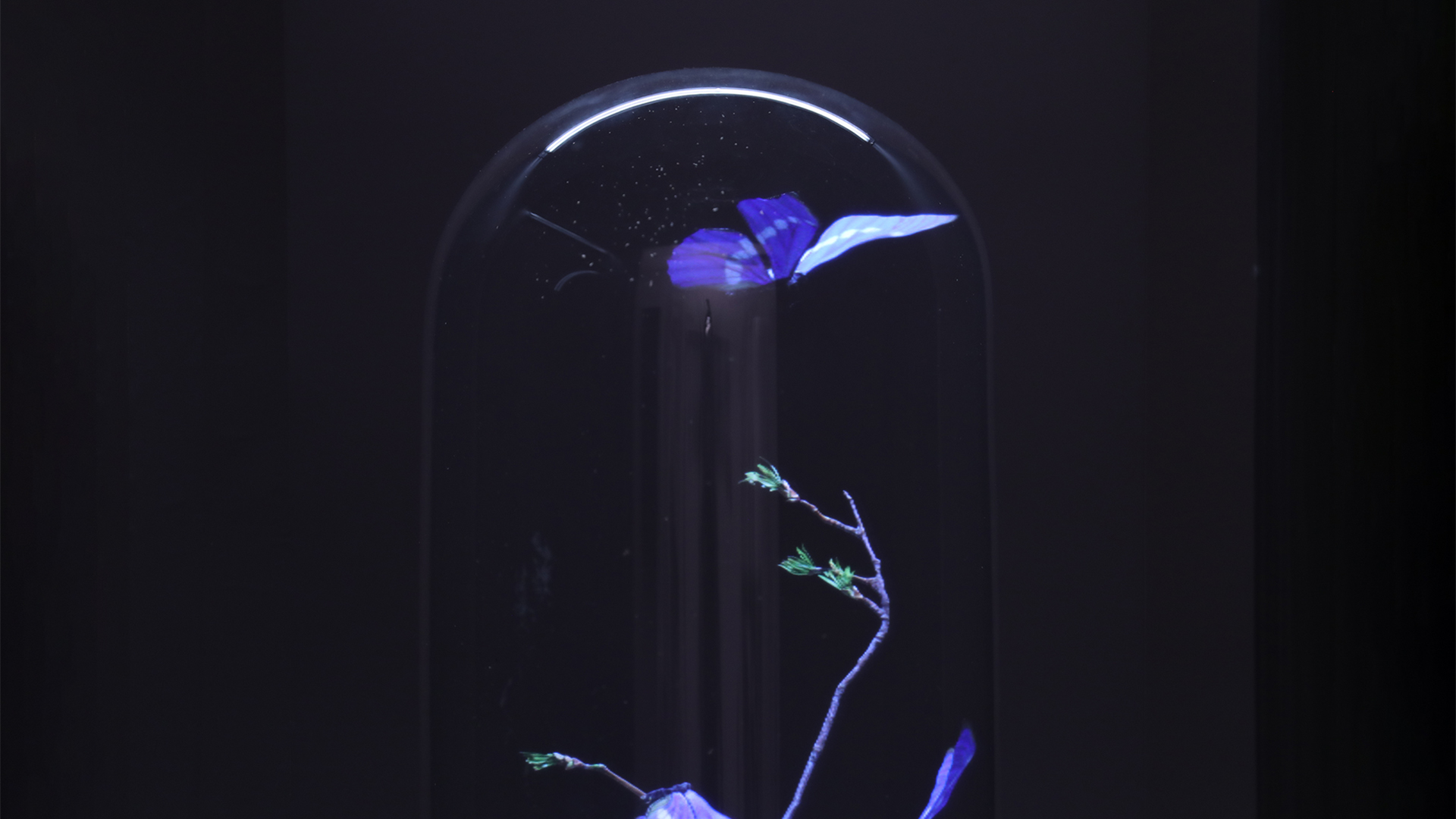 A Neotropical butterfly natively found in South America, the Morpho helena is immediately recognised by the shimmering shades of striking blue on its upper wing surface. These colours are not the result of pigmentation, but rather an example of iridescence: an optical phenomenon in which hues change according to the angle from which the surface is viewed. Housed within the bell jar, three of these butterflies flutter around their environment, eventually coming to rest on a sprouting branch.

When left to their own devices, the butterflies are instinctively drawn to the germinating branch, indicating that it is a source of rejuvenation. The simple wave of a hand, however, disrupts this relaxed state, causing them to dance around the twig in a flurry of activity.

"Fascination with the butterfly is not a recent phenomenon in the art world. From Vincent van Gogh to Salvador Dalí, the butterfly has presented itself as a timeless kindred spirit, offering a variety of interpretations many of which have had a long-standing presence in popular culture, film and literature, as well as art. With their enormous palette of colours, as well as their fragility and variety, butterflies have often been used to symbolise aspects of human nature. The wide range of interpretations is as far-reaching as the many species of butterfly found across the world. One of the more compelling in art history has been the representation of humanity’s capability for transformation. Contemporary artists of different mediums have grasped this historical precedence and upheld the numerous symbolic references, so that the butterfly has come to signify a ubiquitous theme: the duality of life and death. Dominic Harris has built upon these foundations by using the butterfly not only as an art piece, but also as a design object. The viewer is in the direct gaze of Harris’ interpretation as well as the butterfly’s natural creative spirit, allowing new discourses between the audience, the artist and these colourful insects to take shape."
‍
Extract from essay by Harman Bains

Other artworks and collections related to '
Flutter Hologram: Morpho Helena
' include: 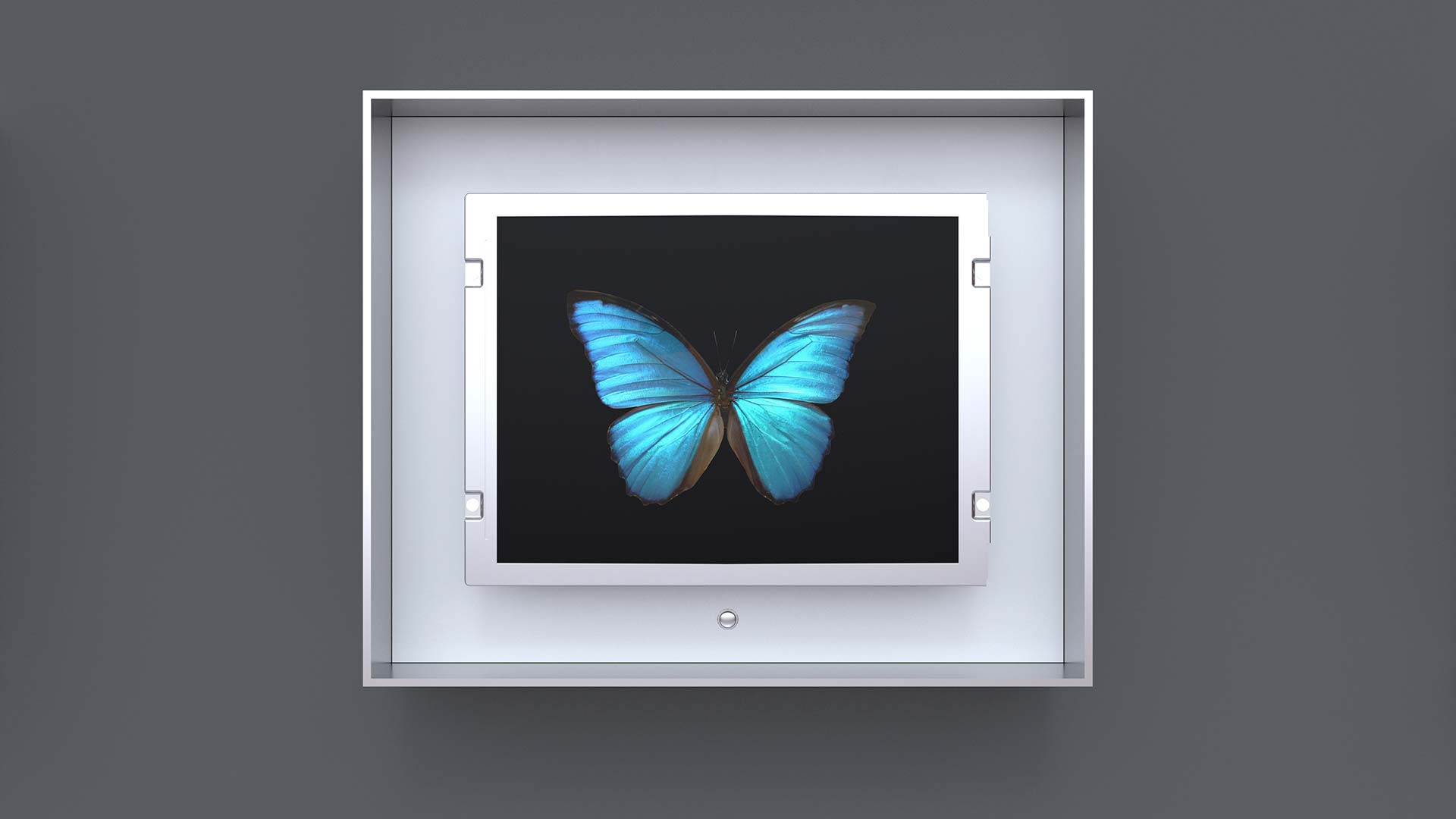